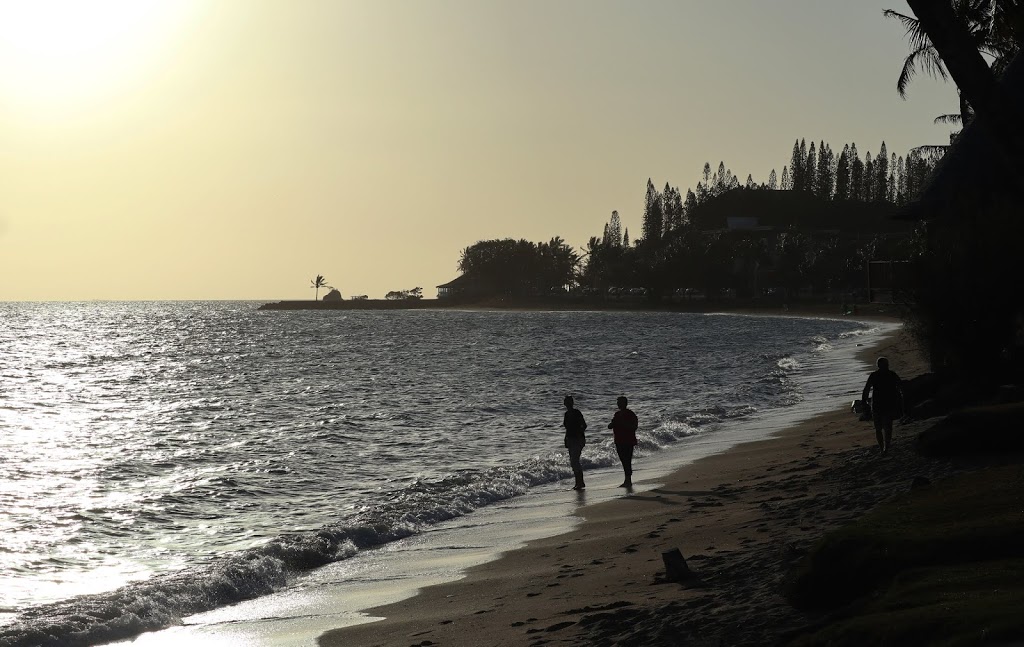 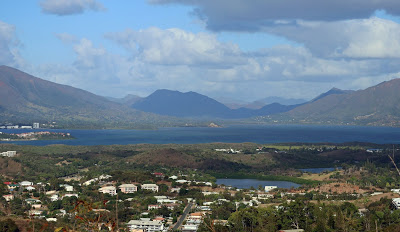 A blog post about another short trip from Sydney – this one to New Caledonia. Here are some tips about how to spend 2 days in Noumea, the capital of New Caledonia. I took an early morning flight on Qantas from Sydney to Noumea International Airport. Immigration formalities were quick and easy. New Caledonia is an overseas territory of France, but it is not part of the Schengen agreement, so it has its own visa rules, separate from France. Nevertheless, EU passport holders can travel there without a visa and stay up to 3 months. There were no taxis waiting at the airport, but people all seemed to be very friendly and helpful and most of them spoke pretty good English. So it was easy to figure out how to get the shuttle bus into Noumea. The airport is more than 50 kilometers away from the city. The shuttle bus costs around 50 USD and takes about an hour. They drop you off at any of the major hotels in Noumea.

New Caledonia is an island archipelago, located west of Australia and east of Vanuatu. French is the official language, spoken by everyone here. Around Noumea most people speak English very well, but I read that outside of the city, English language skill are rather rare. There is a small chance that New Caledonia could become the next new country in the world. They had an independence referendum in 2018, which was rejected by 56% of the population. But they will have another referendum in 2020, which is expected to be a bit closer. The currency of New Caledonia is the Pacific Franc (also used in Tahiti and French Polynesia), which is pegged to the Euro at 120 Francs per Euro.

Noumea is located on the main island, called Grande Terre, which is almost 400 km long and about 50 km wide. Driving along the main road south from the airport to Noumea, I got a good first impression of the island’s impressive landscape. It is very mountainous, with the highest peak reaching over 1,600 meters. 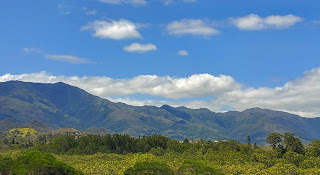 I stayed at the very nice Hilton Noumea La Promenade Residences, which is an apartment hotel located right in front of the Plage de l’Anse Vata beach. I had beautiful views over the pool and the Pacific Ocean from my room.

I arrived at the hotel at around 2:00 pm and since the city center was a bit too far away to walk, I decided to rent a bicycle. There is a beautiful a bike path along the shore.

The only bicycles available for rent at the hotel were e-bikes, which turned out to be a great idea, since the roads became rather steep as soon as I left the shore. The extra e-power allowed me to zoom up to the highest point of the city for some great views over the city, the ocean bays and the mountains in the background.

Noumea looks very well developed and growing. There are many luxury apartment buildings being constructed. There is a noticeable difference in the infrastructure and the general level of development between New Caledonia and the neighboring Pacific Nations. The roads, houses and towns look more like the South of France, rather than a Pacific island.

My ride took me through the town and back out along the huge beaches of Plage de la Baie des Citrons and Plage de l’Anse Vata. Temperatures at this time of the year were very pleasant, at around 28 degrees during the day and cooling down to a nice 20 in the evenings. And it was not at all busy. The beaches as well as the restaurants near my hotel were fairly empty most of the time.

The next day, following the recommendation from the hotel concierge, I went down to the beach in front of my hotel first thing in the morning to take the water taxi to Duck Island, which is located less than a kilometer offshore. Duck Island is a small island, surrounded by a wide sand beach and a restaurant in the middle.

There is a small but impressive coral reef right in front of the island. I rented snorkeling equipment from the little beach hut and headed out to explore the reef. I saw a lot of colorful fish, but unfortunately no sea turtles, which apparently can often be found here. I spent about 2 hours on the island. And by the time I left there were a lot more people here, so it was good to get there early in the morning. It also gets very windy in the afternoons, and the waves become to high for snorkeling. But that is when the kite surfers come out.

I spent the rest of the afternoon and the next morning realxing by the beach and did a couple of nice swims in the ocean. The beaches here have large sections of the ocean separated by buoys to keep the swimmers away from the kite surfers and other water craft. The water temperature wasa bit on the chilly side, but perfect for a long swim.

In the afternoon of my last day here, I had a guided hike to Mount Khagi booked with a local tour company. My guide, Wamy, picked me up from the hotel at 2:00 pm for the 30 minute drive to the park. We drove up on a steep mountain road towards the start of the trail head. Unfortunately, right when we started the hike it began to rain heavily, and it continued to pour throughout the hike for the next hour and a half. So instead of the expected views over Noumea and the bay below, all I saw was this:

It was still an enjoyable albeit somewhat slippery hike, that ended up at a small waterfall.

The next morning I took the shuttle back to the airport for my return flight to Sydney. I had a really great trip to New Caledonia, but I did not have nearly enough time to explore this huge island in any detail. New Caledonia has a lot more to offer than I was able to see, and it should be on anyone’s list who wants to enjoy a tropical paradise, that is safe and well developed, has beautiful diving and snorkeling spots as well as great mountain hikes and French cuisine.