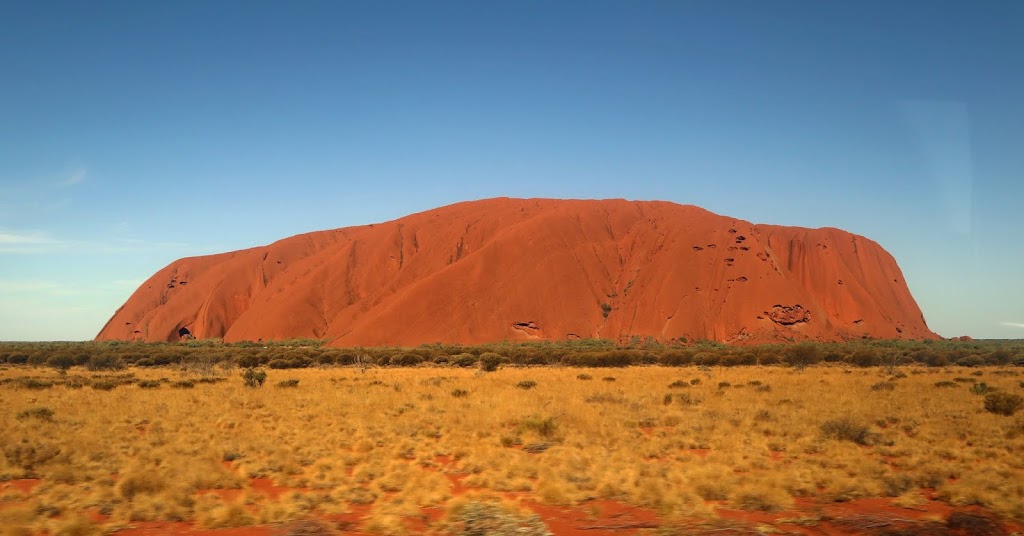 Uluru and the Field of Light

Since I had based myself in Sydney for some time, Uluru (or Ayers Rock as it was previously called) was a must visit. The world’s most famous sandstone rock formation is located pretty much right in the center of Australia, in the southern part of the Northern Territory. There are a couple of daily direct flights from Sydney to the tiny Ayers Rock Airport. I had a lovely friend visit me from Singapore for a week to join me on this little jaunt. We took a 3-hour Jetstar flight that left Sydney at mid-morning.

There is no city of even small town anywhere near Uluru. The only place to stay is the large Ayers Rock Resort, which is located close to the airport and about 12 km north of rock. The resort is extensive and it has a variety of accommodation options at a wide range of price levels, from a 5-star hotel to fairly basic lodges and a campground. There is a free shuttle bus, that takes you around the resort and to the rock. We stayed at the Lost Camel Hotel, which is not the most expensive but a very nice hotel.

The timing of our trip was rather fortuitous. We hadn’t planned this at all, but it turned out we had arrived on the very last date, on which climbing the rock would be allowed. We had heard about this in Sydney already, since it was quite a big story. After many years of back and forth, the Aboriginal owners of the land, finally made the decision to close Uluru for climbing. The official close of the gate would be at 4 pm on Friday, Oct 25th. And we arrived at the resort at around 2 pm. So, the first thing we did was to check if there was still a chance to get to the rock in time. The hotel managed to organize a car for us for the 20 minute drive to Uluru. They sent us a giant stretch limo, which was the only car available on such short notice. So, we quickly dropped off our luggage, headed to Uluru and managed to get into the gate with about an hour and a half to spare.

The climb itself was quite hard, especially the first steep section, where you must pull yourself up along a chain on very slippery rock. It was very hot, and it took us about an hour to get to the top, but the views from up there across the vast empty landscape made it all worth it.

By the time we got back down a large crowd and lots of TV cameras had gathered at the gate, since the official closing of the trail was televised live on many channels in Australia.

The following day we decided to do the circle hike around Uluru, which took about 3.5 hours and included a couple of short detours into side canyons. I’d recommend starting this hike early in the morning, rather than around noon as we did. It was very hot in the early afternoon, and the flies were a bit of a menace. If you are not a big fan of having flies in your face and eyes the entire time, I would definitely suggest getting one of those hats with a net over your face, which they sell in the shops in the resort. Or if you are particularly crafty like Gitta, you can fashion your own face-net using the lining of your jacket:

The hike itself was fascinating, as you see different facets of the rock and strange shapes that were carved out by the wind and rain. Many look like sophisticated modern art sculptures and it is easy to see all sorts of human and animal shapes in it.

Depending on the direction of the light and time of the day, the rocks seem to change colors ranging from bright orange to pink to almost deep purple.

The geological origins of this strange monolith go back more than 500 million years ago. The area used to be covered by an ancient sea, and over eons the sand deposits at the bottom of the sea were compressed into sandstone. Tectonic forces around 400 million years ago lifted it up while turning the sandstone layers by 90 degrees. Over the millennia softer stone around it was eroded away, leaving just this distinctive stone structure with vertical striations, which make some parts of it look like petrified ocean waves.

Uluru was inscribed as a Unesco World Heritage site in 1987. Archaeological findings nearby have revealed human activity as far back as 10,000 years ago, but it was not explored by Europeans until 1870’s. It is considered a sacred site by the local Pitjantjatjara Aborigines, which is the main reason it was finally decided to close it for climbing.

The Field of Light:
Being able to climb the rock was an unexpected bonus, but the main reason I wanted to come to Uluru, was to see the Field of Light, which is a large-scale art installation by British artist Bruce Munro. It is located in a open field about 8 kilometers from Uluru. Bruce Munro had installed similar fields in a number of places around the world, but the artwork here at Uluru is his largest yet. After he completed it in 2016, it proved to be so popular that the initially planned end was extended several times. It is currently scheduled to be dismantled at the end of 2020, but I would not be surprised if they keep pushing this back.

To visit the field, you have to book a tour through the Ayers Rock Resort, which offers a range of different options, from the basic bus ride to and a walk through the field, all the way to a helicopter flight over it. We had two Field of Light Tours booked. The first one was an evening visit with dinner, that started with a lovely champagne reception overlooking Uluru. We watched a stunning sunset behind Kata Tjuta, the other less famous rock formation nearby, and then moved on to a very nice dinner that was set up on a little hill right above the Field of Light.

When it got dark, we saw the most astounding night sky. There is basically zero light pollution out here, and I don’t remember ever being exposed to this many stars with the naked eye. We saw the whole length of the milky way, and could even identify the Magellanic Clouds quite clearly. 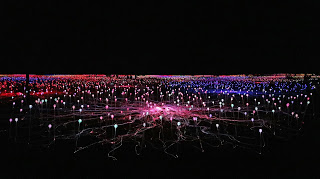 After dinner we wandered into the Field of Light, and it was just even more amazing than we had anticipated. The field is made up of more than 50,000 lights, that are shaped like long stem flowers and connected by glass fiber cables. All the lights are changing colors every 10 to 20 seconds, but the changes are so slow and gradual, that they are almost imperceptible. The whole field is spread out over an area of more than 12 acres, with several paths leading through it.

It really was a magical sight to see. And we were glad we had a second trip booked in the early morning two days later. That tour involved getting up at 4 am, but seeing it again in the morning light with the sky very slowly changing from pitch black to dark blue to light blue was absolutely worth the early morning rise.

We finished the day with a lovely dinner at one of the many restaurants in the resort. The next morning we were picked up by the bus for the drive back to the airport and our flight back to Sydney. We had a fabulous couple of days at Uluru. Not being able to climb to the top anymore, will not in any way make this a less exciting destination. And the Field of Light alone would have been worth the trip. 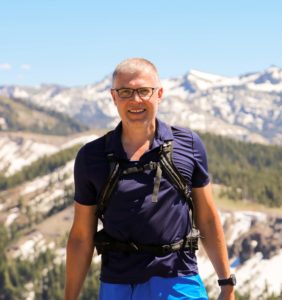